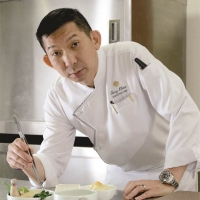 Chef Tony Khoo is a proudly Singaporean chef whose tale of success is based on sheer hard work. He stepped into the kitchen world at 16 years old, working his way up the culinary ladder.

With more than 40 years of experience as a chef, he has garnered many milestones. Today, he is the Executive Chef of PARKROYAL COLLECTION Marina Bay , and has steered the pre-opening of various 5-star hotels worldwide, including the Kempinski Hotel in Dalian, China.

Passionate about humanitarian efforts, Tony is focused on his role as the World Chefs Without Borders Committee, a not-for-organization by the global authority of Chefs, Worldchefs. He is also an accredited Worldchefs judge.profit

Chef Tony self-published the autobiographical cookbook, ‘To Be a Chef’ in 2012. The launch raised more than SGD$300,000 for charity and was the first runner-up for the ‘Best Book for Food Professional - Best of the World” by Gourmand World Cookbook Award 2012 in Paris. The second book he co-authored, ‘The Singapore Heritage Cookbook’, which chronicles past, present and future iconic Singapore dishes, has also garnered similar awards.