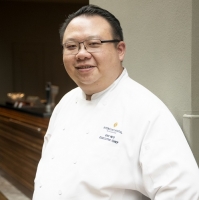 Having started out as a chef at the age of 16, Chef Eric brings with him close to 23 years of culinary and catering experience across varied cuisines including Cantonese, Western, Peranakan, Asian, as well as local delights.
He rose through the ranks to become Head Chef of international buffet restaurant Aquamarine in Marina Mandarin before being promoted to the hotel’s Executive Sous Chef in 2006.

He joined Crowne Plaza Changi Airport as Executive Chef in 2008, where he was an integral part of the pre-opening team responsible for developing menus and implementing operational procedures for the hotel’s food and beverage outlets. He was appointed InterContinental Singapore’s Executive Chef in October 2011.

His expertise and culinary skills as both chef and leader have earned him extensive recognition in the industry. Among other accolades, he was the team manager of the culinary team representing Singapore at the Pattaya City Culinary Challenge 2011,Dubal World Hospitality championship 2013 leading the team to win the gold medal.

He was also one of two elected Singapore representatives for the Tiger Brands World Cooks Tour for Hunger in Johannesburg, Cape Town, and Durban, South Africa, which he received a commendation for outstanding service.
He also appears regularly as a guest chef or judge on popular television food programmes, such as “Koji Cooks”, Wok Stars on Channel 5 & Neighbourhood Chefs, Love on a Plate on Channel 8.