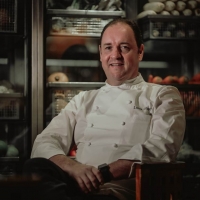 Chef Lucas experience has seen him worked in world-class kitchens around the world, including the 2 and 3 Star Michelin winner La Gavroche in London and the Browns Restaurant in Melbourne which was recognised as the Best Restaurant in Australia.

In 2002, Chef Lucas joined Grand Hyatt Singapore to drive the multi-sensory dining experience at the award-winning mezza9 restaurant, renowned for its open-kitchen concept and authentic Chinese, Japanese, Thai and Western cuisines. Chef Lucas’s success at mezza9 was quickly noticed by Grand Hyatt Erawan Bangkok in 2005, where he spent the next 5 years working with the team to redefine the Food & Beverage experience. Under his guidance, the hotel launched its first organic farm in Khao Yai, refurbished all of its restaurant and event spaces, and successfully launched its outside catering programme.

Chef Lucas returned to Grand Hyatt Singapore in 2010 as Director of Culinary Operations, and immediately initiated a review of the hotel’s food sources as part of Hyatt’s food philosophy “Thoughtfully Sourced, Carefully Served”. His hard work was recognised by Aquaculture Stewardship Council (ASC) and Marine Stewardship Council (MSC) when the hotel was awarded the Chain of Custody certification by both bodies in 2015.

Lucas was also instrumental in the installation of the world’s first complete vacuum waste management food digester system in 2016. The machine has helped Grand Hyatt Singapore keep 400 tonnes of food waste off landfills every year, while converting 100% daily food waste into pathogen-free organic fertilisers for use in the hotel’s green spaces and organic rooftop herb garden. In line with reducing food waste, Lucas works closely with local communities to donate almost 10 tonnes of excess food annually to lower income families in Singapore.

An advocate for preserving the planet for future generations, Lucas and his team are leading the Hotel and Food & Beverage industry on only offering certified sustainable seafood, ensuring all animals consumed are sourced from ethical and responsible origins, implementing nose-to-tail programmes to reduce food waste at the source and destination, and collaborating with local farmers to procure organic vegetables with minimal carbon footprint and food miles.

Lucas and his team have also successfully positioned Grand Hyatt Singapore as a leader in providing plant-based options in Singapore through a series of Food Truck activations, and was also responsible for removing single-use plastics throughout the hotel’s operation.

In addition to his role at Grand Hyatt Singapore, Lucas is also the Director of Culinary Operations for South East Asia where he works closely with Hyatt International ASPAC Leadership Team on developing new properties and F&B concepts. A familiar face at sustainability conferences and panel discussions, Chef Lucas was recognised for his work in F&B sustainability in 2019 when he received the Marine Stewardship Council Hospitality Star Award at the 2019 World Gourmet Awards.