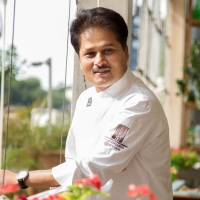 ‘When Abhijit Saha setup Caperberry in 2009, it featured a style of cuisine very few people were familiar with, but with his passion and dedication he has brought the restaurant to the stage where we can safely call him a pioneer in Indian Food Service business,’ wrote Kripal Amanna, Publisher and Editor of Food Lovers Magazine when DNA Newspaper honoured him as one of the ‘50 Most Influential Persons’ of Bangalore.

Abhijit Saha is the Founding Director and Chef of Avant Garde Hospitality Pvt. Ltd., which owns and operates multi award winning restaurants Caperberry (Modernist European), Fava & Fava Bistro (Mediterranean) in Bangalore. His Michelin recommended Signature Indian restaurant Saha (2014 -2017) in Singapore (now in the process of relocating), was awarded the Epicurean Star Award for Best New Restaurant, 2014 by the Restaurant Association of Singapore. His other outles include Café Cassia, a quaint and relaxed eatery based on fresh local produce, Red Rhino – Craft Brewery & Inspired Kitchen and RockSalt – Indian Kitchen and Bar in Bangalore and Afraa – Lounge and Restaurant in Kolkata . With over twenty eight year of national and international experiences Chef Saha is a pioneer in Modernist Cuisine in India and a proponet of Cognitive Cooking with Chef Watson Super Computer by IBM.

In the past he has won the Celebrity Chef Cooking Challenge by UpperCrust, Indian Federation of Culinary Associations – ‘Entrepreneur Chef of the Year’ Award 2008-09 and the South India Culinary Association ‘Golden Hat’ Award 2010 for outstanding contribution to the culinary profession. He is a member of the elite team of chefs who contributed to the ‘World Culinary Arts’ DVD & Podcast by Culinary Institute of America, which has won the ‘James Beard Foundation’ Award in 2008.

Abhijit Saha has studied Hotel Management in Pusa, New Delhi and Oenology & Food Service Technology and Design at Johnson and Wales University, USA as a recipient of the International Hotel & Restaurant  Association’s ‘Foundation for the future scholarship’. His keen interest in wines has taken him all over the world, including France, Italy, Spain, California and Australia. He has also served as the President of the Bangalore Wine Club in 2012-13 and is a member of Chaine des Rotisseurs.

Before choosing to be an entrepreneur, Abhijit Saha worked as Director of Food and Services and Executive Chef with The Park Hotels, Bangalore, 2001 to 2008, as Executive Chef with The Manor, 1998 to 2000, New Delhi and with the Taj Group of Hotels 1990 to 1997, New Delhi, where he started his career as Kitchen Management Trainee and went on to become the Chef of Orient Express Restaurant.

Chef Saha is a believer and practitioner of ‘Sustainable Dining’ and is deeply committed to his philanthropic work as Chef-Ambassador of Akshya Patra Founaton. Regarded fondly as the “Forever Young Chef” he enjoys F1 Racing, Wines, Travel, Architecture, Design and Photography.
Events Information